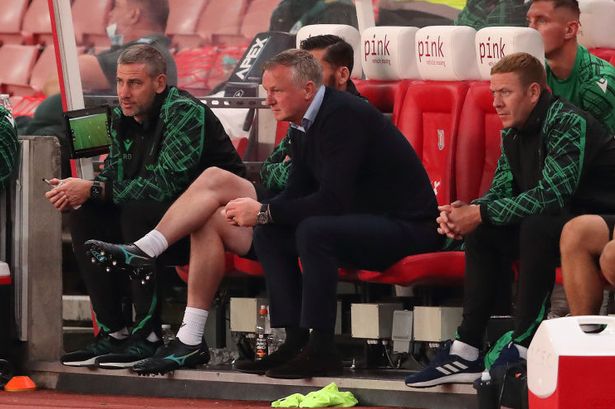 It wasn’t quite as tricky a task as Del boy and Rodney endured, but Deano and Rory were fully aware that it was going to be an adventure in the gaffers Covid absence……

A mid-season trip to Hull on a Sunday afternoon in January wasn’t earmarked by many fans at the start of season, however off the back of what has been a dull time for Stoke fans since the injuries to Souttar and Bursik on international duty, 7 points from a possible 21 certainly isn’t promotion form and the quality of play certainly hasn’t been entertainment in the main for that period. We scored have 6 goals in 7 games: 1 worldie, 1 from the 2nd phase of a set play and 1 solo break away counter attack goal in the dying embers. In my opinion this hasn’t been down to the loss of Powell, Sawyers, Thompson - we have struggled to build play, play through the thirds of the pitch, move opposing teams around when they’ve been happy to defend as the clutch of our team has been missing.

Harry Souttar and Joe Bursik are up there with the most comfortable of CB’s and Goalkeepers in this league with the ball at their feet. Just like the clutch on your car always being there to start any journey, they have been there to kick off any successful period of possession play we have had this season. Midfielders tend to get the praise for lovely football moves, but as we’ve seen with these 2 missing, our midfielders simply haven’t been able to get any fluidity in possession we spend all week working on ball retention, pass and move, rotations, overloads to create opportunities but that simply doesn’t happen if you can’t do the first part which is move the ball around the first third of the pitch to move the opposition defensive unit to create space for the next pass.

Anybody that has replaced these 2 during their absence and prior to Hull simply haven’t been able to fill that void. I left the ground after the Blackburn game thinking “jeeeze we’re in for a rough ride here!”. Mowbray got his team tactics spot on: Sit in, the 2 strikers from Blackburn focus on Stokes wide centre backs and cut off any easy passes to the CM; let Danny Batth have the ball….. As much as I think Batth is a great pro and somebody you want in your team, in the trenches defending, he’ll put his head and body on the line for the cause….. ball playing isn’t his forte.

The following 3 home games Boro, Derby, and Preston followed suit and quite simply, the most optimistic of Stoke fans knew it was obvious atop 6 push wasn’t on the cards unless we could fix our build up play in the first third. We were at a crossroads in our season it felt after Preston. We knew reinforcements were required, but with Profit and Sustainability rules….would it be possible?

With 2 weeks before our next league game, the transfer window now open - if the balance sheet rules allowed possible… we had/have the opportunity to address our woes.

The FA Cup game v League 2 opposition offered opportunity for some to stake their claim: Bonham, Ince, Doughty, DWP, and Brown would of all sat watching the previous 3 home games from the bench thinking ‘give me a chance gaffer’. It’s fair to say that without Bursik and Souttar, our build up play is poor and without Fletcher we haven’t got a high calibre target man to go long….. so, the gaffer had his thinking cap on…..

352 in possession or 532 out of it got a tweak to 361 in possession with the introduction of DWP creating overloads in midfield and Tom Ince as a CM with the intention of getting into and around the box to get a shot off at goal either via a direct run or a cut back from the wing backs crossing. Midfield goals have certainly been missing since Powell’s injury. It was League 2 opposition but after back to back home defeats and 1 win at home since the 1st of October a win was vital for fans and players anxiety alike.

The week leading to Hull was highly successful, not 1 but 2 centre backs acquired: Harwood–Bellis brought in to replace Ostigard and Jagielka to replace Souttar. The long-courted addition of Lewis Baker in midfield happened just after, and optimism was returning.

Off to Hull, the adventure of Deano and Rory began without the gaffer and intrigue on the team sheet …. Would the newbies be straight in. Would Fletch and Campbell start up top … would any of last week’s  keep their place? I don’t think any Stoke fan would have expected the first 11 for Hull, but the man known as the Player Whisperer in Northern Ireland showed his man management skills by rewarding many who have been patient, done what was asked of them and then delivered a win. Bonham made his league debut in goal, DWP and Brown started up top, and Ince started in CM along with the 2 new CB’s at the back.

Many would look at that team on paper and panic ….. ‘Chester and Jagielka can’t run’ ‘how many chances does Ince need’ ‘DWP is too lightweight’ - all opinions, however Deano ‘Del boy’ Trotter and Rory ‘Rodney’ Delap were brought into a far more important one …. ‘He who dares, wins!’

From a human perspective ,the man management of MON and his team would have left all the lads getting a chance v Hull in the league willing to run through brick walls. He dangled the carrot they’ve been waiting for, gave them clear instructions and expectations, and left them to deliver. There was a lot of risk in that team selection, in what was a big game due to our previous run of results, but rather than what could go wrong…. The mentality of what could go right is what our leaders have and that is fantastic for a hungry growth mindset based group.

Bonham did everything asked of him in his box is happiness to pass the ball to a CB in front of him or quickly roll it out was great to see. Harwood-Bellis, first thought is to get the ball down, retain possession, got a long throw om him. As a 19 year old dived into a couple of challenges which he will learn to jockey. Jagielka, organised and led by example in a way that I can only liken to Gerry Taggart back in 2003. Bold, confident personality, infectious to others around him. Leadership, motivational and communication skills, composure, technical ability, and game intelligence of someone with circa 15 years Premier League experience, 40 England caps and part of European and World Cup squads. He demanded the ball, demanded movement and support from central midfielders to show, received, rotated gave it back and forth with his team mates with ease allowing us to draw Hull out and making space for us to exploit. Orchestrated the entire team and everybody will have benefited from him and look up to him.

Chester – after not really looking comfortable since the West Brom game, did well. It looks scary when a ball gets knocked in behind Tymon and it’s a footrace but this guy knows how to defend 1v1 and is happy with a ball at his feet. Spent most of the game smiling as he benefited from Jagielka communicating and making the ball do the work

Smith and Tymon I imagine really enjoyed the game, albeit they covered a lot of ground up and down. It’s a demanding job providing the width, hugging the touch line for the length of the pitch but as their counterparts for Hull were out and out wingers, you got the impression that the attacking side of the game was quite easy for them.

Allen; much is said about Allen and the need for a ‘proper’‘ enforcer’ DM. With this manager’s style of play we don’t need one. We need our DM to be comfortable receiving the ball and laying it off 5/10 yards. He looked very happy doing this with all of the back 3. Covered lots of ground in the old TP ‘cage’ and the one-time Hull did get in, he read it and dealt with the danger without giving away a penalty. Another experienced player who benefited from having Jagielka’s mouth behind him.

Clucas looked like he really enjoyed it. I’m not a massive Clucas fan, as I believe he’s got the ability and physique to be so much more than he is. However, yesterday he was in his element he worked hard, actually showing for the ball in our own half to start play off and when he got the chance to do what he loves ‘creating in the final third’ he delivered. 2 assist and will probably be disappointed he didn’t get on the score sheet.

Ince, playing for a contract – here or elsewhere… time will tell, but he’s playing with a bit of a smile and confidence which he simply hasn’t had for any of his time in Red and White. Ince is like Clucas for me. Got technical ability, could be so much more, but isn’t. Its 3 starts in a row,3 goals and an assist in his last 4 games. He worked hard, wanted to score, and did.

Brown probably feels a little aggrieved post Campbell return from injury and his international debut to find himself on the bench for the most part. Our Joint top scorer this season with 6 and 2nd most assists with 5. Continued to show his development scoring another header that you’d expect from the 9 million pound international man Sam Vokes. Middle of the post 8 yards out is where you will find Brown when a crossing opportunity arises. Ran himself into the ground as ever.

Wright-Phillips: as 20 year old league debuts go, I’m sure he’s buzzing however with the pedigree of his family I’m sure he’ll of been disappointed to not get on the scoresheet. A nervy opening few minutes as he lost the ball when trying to control, however as all good players do, they brush off mistakes and come back stronger, much to the dismay of the Hull players who tried to physically impose themselves to which D’Margio showed his Dad’s low centre of gravity and left them for dead. Twisted in knots, akin to Kevin McCallister leaving Marv and Harry with smoke coming out of their ears. You can imagine the animation grandad Ian and dad Shaun would have had seeing D go through twice 1 on 1 v the keeper. One thing for sure is that if D can continue to apply himself then we’ve got another great prospect on our hands.

The subs all did their bit: Doughty replacing injured Tymon, Baker got his debut and slotted in comfortably in CM, and Tye a late cameo who I imagine will of sat throughout the game thinking he wishes he was playing which will only add to the hunger in training this week.

We’ll certainly have lots sterner tests than Hull in our remaining 21 games and no tougher than Fulham up next, but the positives were there for all to see again. We could have had scored 6 or 7 and it wouldn’t have flattered us. Training this week will be a great place to be. 352/532 or 361will remain. The Player Whisperer will have to be at his man management best though. Bonham, Jagielka, Allen, Tymon, Smith will be certs to start, however rather than a depleted squad, competition is back. Chester and Harwood-Bellis will be being hounded by Wilmott. Baker, Thompson and Vrancic will all fancy taking Clucas and Ince spots, and Campbell and Fletch will be on the tails of Brown and Wright Phillips.