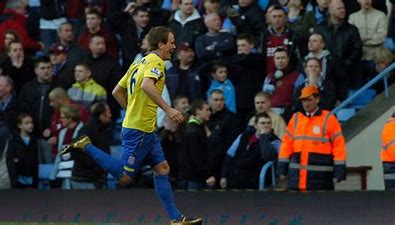 I recently sold my car. I won’t say what make it was – but it wasn’t something you’d turn your head for. I’m not into cars. Hell for me would to be bound, gagged, in a room with an F1 enthusiast, watching Top Gear on loop. Oh, with James Corden telling ‘jokes’. Oh, plus Jack Wilshere being there, too. Give me a life in Hades over that, any day of the week.

But my car was steady for several years. I need a car to get us from A to B. Simple as that. I also don’t want it to cost me any more money than necessary, either. We hardly spent a penny on it, and it did 92,000 miles. It never, ever let us down. Firstly, apologies to Glenn David Whelan for comparing Glenn David Whelan to a family saloon car. But I mean it as the ultimate compliment, Glenn. Promise!

I’m sure Glenn Whelan would want me to describe him as a roaring Lambo or Ferrari; but whilst everyone likes driving a fast car every now and then, you also need that reliable motor that simply gets you there, too. A car that guarantees you’ll actually get to the finish line in a race and be competitive. No fuss, nor mards, no breaking down; just solid reliability.

It’s no coincidence that Glenn was one of the first names on the Stoke team sheet over his ten seasons and 338 games for The Potters. It’s also no coincidence that managers with diverse and contrasting ideologies as Tony Pulis and Mark Hughes saw Whelan as the glue to hold the Stoke City team together. Such a pity that some Stoke fans wouldn’t or couldn’t see exactly what Whelan offered to the team. “We need an upgrade on him”, was the call from some quarters ever since we bought him 20th January 2008. Well, that wasn’t too forthcoming, was it?

What did Glenn Whelan offer the team? You’d be better off asking the team that. They’d have plenty to say. For a start, what Glenn Whelan did do was allow a certain Mr Steven N’Zonzi to be the best midfielder I’ve seen at Stoke in the last three decades. Glenn Whelan also made a number of other players be better players, simply by being in the same team as him. He made our back four a better back four and he allowed our flair players to show their flair.

Glenn also seemed to resemble a professional footballer from back in the day. Train hard, play hard, do your job, go home to your family. Back pages only, not front ones. Players I have always had a huge respect for. And above everything else, he was selfless. Putting others first, and the team first. That’s Glenn Whelan: It was all about the team and the dream. There’s no ‘i’ in selfless, but there is in selfish.

Tony Pulis gave him the responsibility of keeping hold of the keys to our infamous ‘cage’, and after Mark Hughes arrived in ST4 no one really took those keys off him for a long, long time. Let’s face it: you do not play 277 games in the Premier League for two contrasting managers if a) you can’t play or b) you aren’t doing exactly what the manager wants and the team needs. That just doesn’t happen.

As stated before, what I loved about Glenn Whelan was that he always put the team first. He never, ever hid. His worst game for Stoke? For me, it was at Blackburn in the FA Cup in February 2015. Yes, THAT game. I think he was captain that afternoon at Ewood? He couldn’t do much right that day, Glenn, but he went up so much in my estimation when he absolutely laid into the team on the pitch and in the media afterwards. It was superb stuff: he could have said nothing and hidden behind the disappointment of the result and his own performance. He didn’t. He showed selflessness and huge leadership qualities by putting the team before himself. He knew he’d get stick, but that wasn’t on his radar. He said what needed saying and had the guts to do so, despite knowing that the finger would be pointed at him.

“There’s Whelan, having a right go at others when he’s been garbage”.  I heard that in the away end at Ewood Park that day and over the next week on social media and websites, too. But that is exactly what I want from a Stoke City player or captain. Crikey, he even had a go at Abdoulaye Faye at Chelsea for his lack of a warm-up. It’s always the quiet ones who are as hard as nails, not the ones who shout their mouths off.

You never saw too many kids with Whelan 6 on their shirts, do you? And you never really heard kids going mad when they opened their Match Attax cards and Glenn’s face came into view. Shame that. But that’s probably because of the ‘glamour/name’ players we have had at the bet365, how modern football is, and because he never hunted the headlines, either. He’s simply been a bloody good footballer for Stoke City and one who was criminally underappreciated and underrated by quite a few.

……But tellingly, not by his peers and managers. And that’s a massive clue as to why he’s been one of the best signings Tony Pulis ever made for us.

When you have a plethora of players capable of 9/10 performances - or at the same time 4/10 - you need that steady 7/10 player. A player who at 2-1 up in the last ten minutes throws himself at the ball to block a goal-bound shot and then get the team going afterwards. You need a player prepared to shoulder-barge a Man United player on the break and take a yellow card for the team. You need a Glenn Whelan. I always hate to hear Stoke fans having a go at our players, never mind one who has sweated blood for the red and white stripes. Glenn Whelan was an intelligent, totally committed, crucial player for Stoke City. And very probably underrated, too. The bloke can play. And at Villa Park he gave 2500 Stokies one of the best mentals of our lives, and in 2010 on our own turf Glenn was an oasis of empathy and humanity in a desert of Arsenal players being Arsenal players in that game.

When we’ve been truly dreadful over the last thirty years or so, we’ve been crying out for the likes of a Glenn Whelan in the team. When we had one for almost a decade, and one that we got for an absolute steal at £500,000, did we really appreciate him as much as we should? I know I did. “Everybody needs a Whelan in the middle”, went the song. It was spot on. He's never been replaced, has he?

Why cherry in the title?

Well, Glenn originally played for Cherry Orchard FC in Dublin, before he started his career in England. And like my old car - I really hope Glenn Whelan keeps on trucking and doing other teams proud in their midfield for sometime to come!