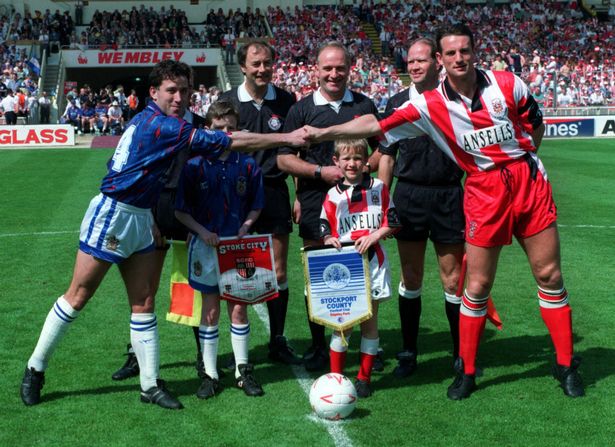 To any Stokie under the age of 30, the idea that Stockport County Football Club was ever a rival to Stoke City seems a little bizarre. Languishing as they do now in the Conference, it is hard to imagine that for a brief period there was an intense and bitter rivalry between the two teams and their fans.

For me, this rivalry was brought in to sharp relief as I was a young teacher in a Stockport secondary school at the time. In September 1991, I was two years in to my teaching career and had just moved schools to a large comprehensive school on the edge of Stockport. The majority of those who attended the school were, as you would expect, supporters of one of the two nearby Manchester clubs and only a handful actually supported their nearest Football League team.  As a Stoke fan(more than as a teacher), I had a good relationship with those who did support the Cheshire version of SCFC.

With the inauguration of the Premier League still a season away and the gap between the top division and those below nowhere near the chasm it is now, Stockport and Stoke fans found themselves in the same boat – longsuffering supporters of local teams who were in the third tier of English football (when it was actually called the Third Division). As the season progressed, we would have conversations about how our teams were faring and about the strengths and weaknesses of our opponents. It started to become apparent that both teams were heading in the same direction – potential promotion to the division above and that is really where the trouble started.

In addition to my workplace, I was married to a girl from Stockport and although, like her Dad, she supported Manchester United she was beginning to show interest in Stockport as they were going through a relative purple patch. As the first meeting of the 91/92 season between the two teams loomed, there was naturally quite a bit of interest as well as some genuine anticipation and excitement. The game took place in late September, by which time Stoke had taken 13 points from their opening 8 games with Stockport just above them in the table.

As it turned out, a Stockport-supporting friend offered to drive (excellent, I could drink more beer) and my wife decided to join us – I headed for my usual spot on the Boothen End while they took up positions in the away section. Our meeting after the game was a clear indication of our aspirations; while the Stockport contingent were genuinely delighted with the 2-2 draw (especially having been 2-0 down at half time) I was, if not devastated, certainly disappointed. I thought we were better than them and had expected to win the game. I didn’t enjoy the journey home and it was to get noticeably worse before the season ended.

It was fully seven months later, in April (20th),when the two teams met again and by now the stakes had been raised significantly. The game was a hard fought 0-0 draw which kept Stoke just about on course for automatic promotion. However, defeats in our final two games meant that Stoke would have to do battle in the play-offs and guess who our opponents would be........Stockport County.

So, just twenty days later, the teams met again and things took a turn for the worse.

I realised early on that I was not going to get a ticket in the Stoke section (the capacity for the whole ground was about 8,000) so, working in Stockport, it was simple to pop down to Edgeley Park and pick up a couple of tickets for me and my brother in the home section (no membership schemes or databases, just produce the cash and walk away with the tickets). On the day, it was clear that I was not the only Stokie to take this option and it wasn’t going down well with the local ‘hard men’ who were patrolling their end and actively seeking out Stoke infiltrators. Shortly after kick off a big fight erupted in front of us and me and my brother decided it was time to get out. We hopped over the advertising hoardings and made our way around the track towards the away end, past Lou Macari in the dugout (we gave him our regards) – it was all going so well and we were almost in the away end before an officer of the law decided to halt our journey and query our intentions. Somehow we managed to convince him that we were decent law-abiding citizens (true) who had accidentally ended up in the wrong end (less true) and had simply escaped to safety (definitely true).

The only problem was that my hop over the hoardings from close proximity to a fight and my interview with the policeman had been witnessed by several pupils I taught and some of their parents. By Monday morning, questions were being asked. By coincidence around the same time I was involved in an accidental clash of heads while playing for my Sunday league team which resulted in a black eye. Needless to say some put two and two together and made the inevitable five.

Proximity to fight + conversation with the police + blackeye = football hooligan.

My only saving grace was that this all pre-dated the widespread use of mobile phones and social media meaning that my headteacher could dismiss what he heard as rumour and I escaped a very awkward professional conversation.

Carl Beeston got sent off and Stoke lost the game by a single goal that day. The second leg took place under the Victoria Ground lights three days later and I was very fired up for it. A first minute goal from Stockport killed the atmosphere and although Steino got an 81st minute equaliser, we couldn’t find the second goal to take it to extra time. I had expected Stoke to overturn the deficit and looked forward to a bit of gentle gloating the following morning at school. It didn’t turn out like that and I was advised in the pub afterwards to do a ‘sicky’ the next day and avoid saying something that I would later regret. It is the only ‘sicky’ I have ever pulled in my life and all because Stoke couldn’t overcome Stockport County.

As many readers will know, the season hadn’t finished –Stoke still had one more game to play: the Autoglass Trophy Final against guess who……..Stockport County, of course. This game was a relief to be honest, it may not have been the final we wanted to be in but it was a good day out, with the Stoke support massively outnumbering the opposition (by over six to one at least) and we won with a goal from Mark Stein (of course). To make things even better, Stockport lost in the Play Off final too and so we would meet again in 1992-1993.

Wisely, the fixture computer (believe that if you will) kept the two sides apart for a long while and it wasn’t until March 1993 before we met again; a 2-1 victory secured the points at the Victoria Ground but it was not incident free. Mark Stein, having scored in the game, then punched Jim Gannon in retaliation for a comment at the end.

The following month it was off to Edgeley Park for episode seven of this epic tale. But not for me, I opted out – as it happened a good friend of mine was getting married that day which provided me with the perfect excuse not to be in attendance and therefore to avoid the risk of any incident which could damage my teaching career. The Oatcake at the time described this game as follows:

“The atmosphere for the match was one of the tensest I can ever remember, though what else can you expect when it’s not only the fans, but also the players, that hate each other”.

While Phil Shaw of The Independent summed things up very well in his match report:

“Hostilities between Stockport and Stoke, not so much an undercurrent as a torrent throughout a bitter Second Division promotion battle. The mutual antipathy owes something to the sides having met six times in a year as well as to playing style. While Stoke can be robust and direct, they are nowhere near as one-dimensional as Stockport, who combine a crude long ball game with aggression bordering on intimidation”

The 1-1 draw was a much better result for Stoke than it was for Stockport and there was another post-match twist as Jim Gannon’s girlfriend decided to get her own revenge on Mark Stein by spitting in his face – the Gannon/Stein thing ended up with a court case, but by then Stoke had moved on.

As we all know, Lou Macari guided The Potters to promotion, Stockport failed again in the play-offs (goading banners were hung over the M6 to the displeasure of Stockport fans returning from Wembley) and the teams did not have to play each other again for a long time. An FA Cup game in January 1997 (which we lost of course) and two league games in 1997-1998 are the only times we have met since.

Since then, the bitter rivalry has slowly dissipated. I worked at that school for another eight years, the kids moved on, and by the time I did I had begun to grow slightly fond of Stockport and certainly wanted them to stay in the football league (they finally relinquished their status in 2011).

When I think of my Stoke supporting days of the early 1990s, I find it quite remarkable to recall just how much Stockport County influenced my thoughts and feelings.