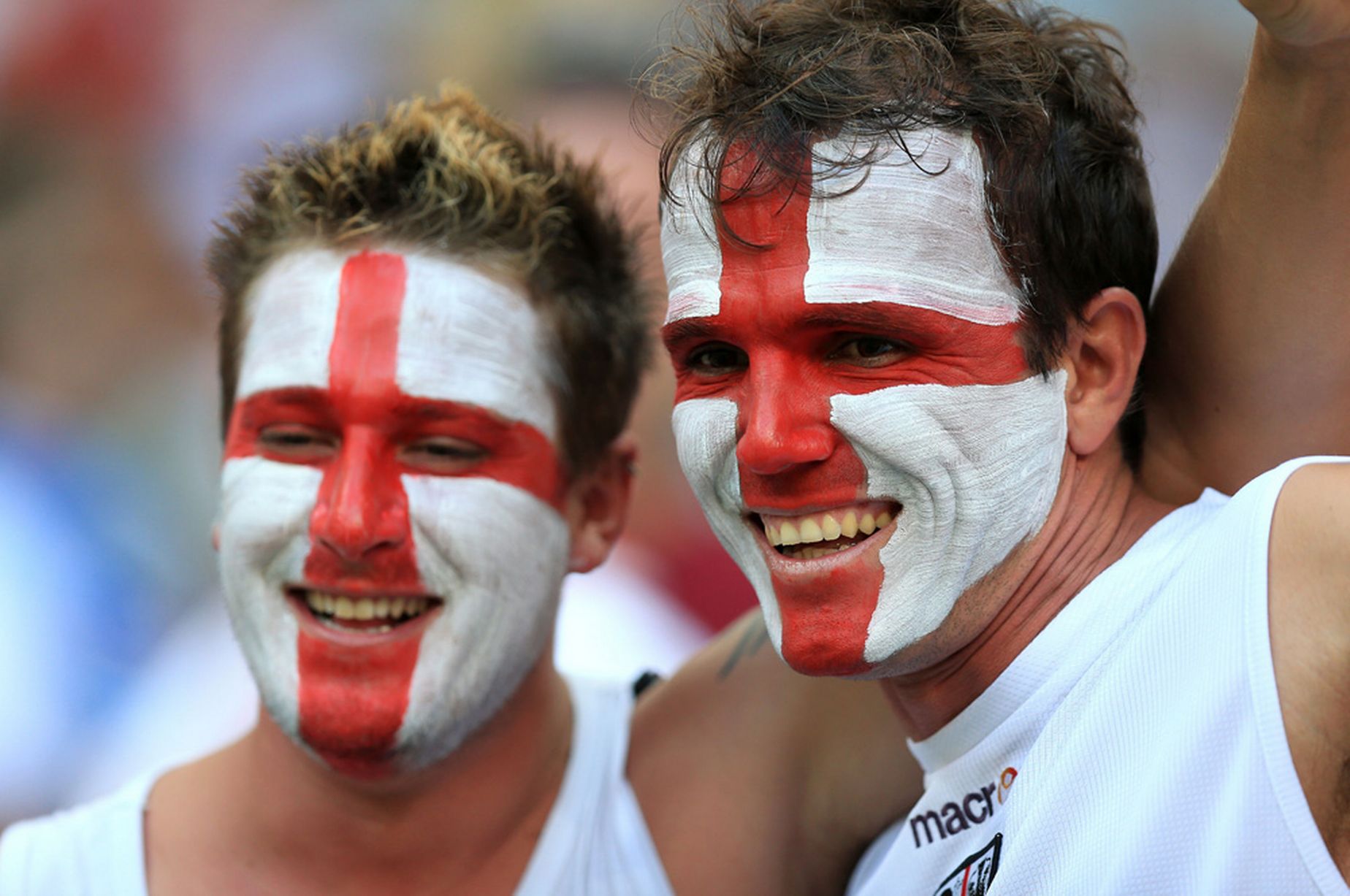 It's not quite Stoke City, is it? But every two years, we get the delights of an international tournament to quench our footballing thirst in the Summer months. Here's my take on watching England through my lifetime.

I've never really 'got' supporting England as man others do. There, I've said it. Send me to The Tower.

I have at times, but again, I'm struggling a bit at present, when I really shouldn't be. Last 16 of a big tournament, Germany on the horizon.....but I see function, beige, doing a job, and the refusal to take the handbrake off. Give me some joy, something to get me off my fat arse. Yes, win. But can we do so with a certain style or even recklessness? I sit by my youngest son, and yes we cheer the goals......but like watching us from January 2021 onwards - it's all a bit meh at times. Let's hope the knockout stages see us going for it more. Hmmmm........

It's not that I'm unpatriotic or I don't want England to win, but I'll be dead honest, I've never been the kind to see myself as anything other than a Stoke City fan from Stoke-on-Trent. Not just first and foremost, end of, basically. Of course, I'd love them to win these Euros, manly because the country and people need a huge tonic (with gin) after the last sixteen months or so, and it might make people think of new songs that don't include airplanes. No, football has the power to run the full gamut of emotions, and it would be so to see folk smiling again. I'm not into the flags and facepaint etc....but fair play to those who are. They are getting more enjoyment from the experience than me. Truth is, my lad has three international shirts - Germany with Huth on it; Switzerland with Shaqiri on it, and Austria with Arnautovic on it. I'm sure if we ever have an England player from ST4 in the future.......

Will I cry? Er, no. I'll just chat crap on Twitter as per usual about the game, slate the manager and players, the FA, Premier League, and within a day or so it'll probably be put right at the back of my mind and list of problems I have. But if Stoke lose to Reading on the first game of the new season, I'll be gutted until we next play. Like most, I would imagine, club always comes way before country.

"Would you prefer Stoke to win the Premier League or England the World Cup?". No competition, indeed I'd take another Autoglass Trophy never mind the title, thank you very much. My primary connection is with my city, not my nation - always has been, always will. I know that will confuse and probably anger some, but that really is how it is.

I've nearly always felt a disconnect with the England team and players - certainly since big money came into the game, anyway. There's us, playing Hartlepool away, and there's them, players from top flight clubs, big names, big money - going through the motions, withdrawing at the twinge of a hamstring etc etc.... Perhaps it's because the nu-money that came into football in the early 90's came at exactly the time when I probably loved watching Stoke City more than I ever have done in 47 years? But I never gave a toss about the Premier League in 1992, so why should I really have done so about the national team? That was probably my thinking. I also have a big soft spot for Wales. But that's for another article......

Maybe my lack of love for the national team compared to man reading this is due to the scenes I used to see on the News and Sportsnight during my years growing up in Sneyd Green - namely, any number of games dominated by events off the pitch rather than on it? Of course, I saw fighting at Stoke at times, but this was on another level. Fans who saw themselves as an invading army, acting like idiots as soon as their feet touched foreign tarmac, plotted up in the main square, lobbing plastic chairs at all and sundry whilst singing about a war that happened 50 years ago, but one in which the country we helped to defeat simply get on with the task of building a better country. And I know that the media and social media in the next 4 days leading up to our last 16 game will be full of jingoistic crap. One country moved on from the war and yet another seems just to want to sing about it and bask in the glory of winning it. That's not for me.

I'm a son of ST1 - the postcode, not the establishment, by the way - and see one of life's great pleasures in going to new places and trying to immerse myself in that place. I don't want to take over, tell everyone where I'm from because the top I'm wearing or possibly the way that I'm acting. I'm a lover, not a fighter. I want to make friends, not enemies. And part of that is when I go to new places to try to fit in. Yet, I'd flick the telly on and that simply brilliant Sportsnight theme tune would be the introduction to carnage on the streets of Copenhagen and the like. It didn't endear me to follow the national team, and the few games I did go to at Wembley in the 80's saw scrapping between England fans all over the shop. It was often the same on family holidays....it never seemed like other nationalities couldn't handle their ale, act the tool and create a bad impression with locals.

I loved, and was so proud of, how Stokies acted on our 2011/12 European tour. Visiting potential hotspots such as Istanbul, Tel Aviv, Split and Kiev might have been a recipe for disaster, but from what I saw, Stoke fans acted with a touch of class and dignity in the vast majority of cases.

Back to the national team - Fair play to Gareth Southgate, in 2018 he did the almost impossible - he got me to quite like the national team again. Even a player who I had interviewed just before the tournament - who I thought was a complete knob - came across brilliantly at that tournament. The England PR team did a brilliant job during that month or so, and I was swept along (as much as I'd allow myself to be) on a wave of It's Coming Home. Unfortunately, a pretty easy draw masked the failings we saw when we played the first half-decent side we came across. The Croatia defeat actually hurt, because I'd built up a bit of a connection with the national team.

Southgate was, and is, a nice bloke - the kind of inoffensive, bright, articulate bloke that made you happy for him when he did well. Whether he's good enough tactically or as a leader to do what many think he should, is another thing, but for that time of my life, with a kid who loves football getting right into the tournament - he was exactly what we/I wanted.

He's still a nice bloke, but now the stakes are higher. I know we've head all this 'Golden Generation' bollocks before, but this time we really do have an exciting crop of youngsters. So bloody play them! Indeed, play them all! I've had decades of "well, they need more experience", only for that experience on the pitch to let us down time after time. No, what I want to see is a bit of joy from my national team. It's not Stoke, so whilst the result is important, it's not massive for me. I want to be entertained, and I want a bit of joy and hope. I don't want two holding midfielders against Scotland. I don't want rigidity and beige. I want colour and flamboyance. I want Grealish, Sancho, Foden, Sanko and the like all shoehorned in to one big young, fearless attacking maelstrom of a team. I want my kid to run home from school next Tuesday and see a team that will excite him when it's announced at 4pm.

The times I have really got into tournaments are when we either have had managers who were sound or players that thrilled. Italia 90 with Gazza and Bobby Robson; Euro 96 with Venables, Shearer and co........

I'll never forget the summer of 1990. Anyone around back then wouldn't either. I was uni in Swansea, and it was obviously touch and go depending on where you watched the match. You didn't really want to venture into the city centre to watch England for obvious reasons, but you did want atmosphere, so we stayed in the uni bars for our own safety, and only after the Cameroon game did we venture further afield. After the first game of the tournament, like many, we had Cameroon as our second team. They were brilliant to watch, one minute playing amazing, attacking football, the next being the biggest shithouses ever. It was intoxicating - plus, there was a girl from Cameroon in our halls of residence and she was stunning. Only the England games had a bigger turnout in front of the communal television than Cameroon matches - for some strange and unknown reason.

The night we beat them in the quarters, we all went to a club in town called Martha's Vineyard, along with our new friend. Usually an untucked shirt and moustache-filled club full of rugby lads from the valleys, it was student Madchester night, so could get away with being on each other's shoulders singing World In Motion. Just a great time in my life, but typical unlucky me, it was my mate who scored more than Lineker that night! Oh well, the sing song through the back streets of the Uplands were ace for the rest of us, as we muttered how bloody lucky he was under our breaths.

96 was all about Baddiel and Skinner - but I didn't get it, as I couldn't really stand them to be honest. But it was harmless enough, and we had a manager who was media gold dust and a wide boy, and team that featured Gazza. That was enough for me. The Holland game made everyone believe. We dismantled the best team in Europe at the time and it was ours to lose. But lose it we did, as did my Brad his Doulton figure. We watched it round his, and as we missed a chance - maybe Gazza's extra-time stretched leg - my leg instinctively booted the table which hosted said Dulton figure. Gareth Southgate wasn't the only thing to lose their head that night.

But it's Stoke City are who I am married to. I want a bit on the (footballing) side. I want rocket fit, I want excitement, danger and the chance it could all go so horribly wrong - but knowing that if it goes right it will be amazing, so amazing.

My team? I'd be as attacking as I could....but get our full backs higher and be fluid when we can, and we need a set piece expert in there as ours have been crap so far.....4-2-3-1

Oh, and don't get me going on the national anthem....just compare and contrast to almost every other one we have heard in Euro 2020. Please can we have The Birdie Song, with all the time lined up doing the dance? Be ace, that!

Come on England. Show a bit of leg!