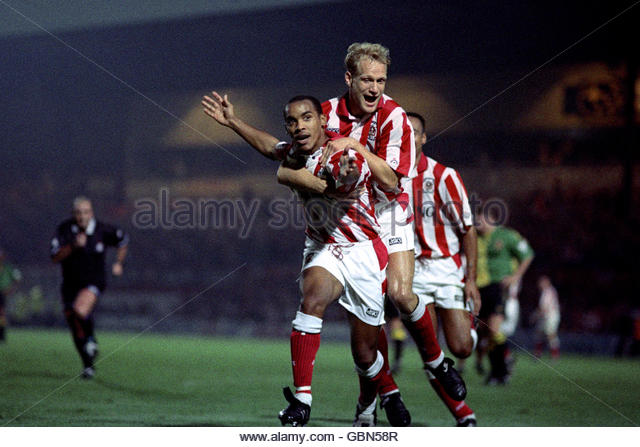 A firm fan's favourite, Toddy was renowned for scoring some pretty special goals during his time in ST4. We spoke to him two years ago about his time at The Victoria Ground......

‍TODDY ON: GROWING UP IN ICELAND

‍You grew up in Iceland – describe where you grew up…...

I grew up in a beautiful town called Akureyri, here in Iceland. Sometimes called capital of the north or the Town of the Midnight Sun, Akureyri is a town based north of the country and it being in the north of Iceland, it can get very cold and we can have a lot of snow in the winter months. The summers here are very good, but short.  I do not live there any more, I live in the south, close to the capital Reykjavík. We do not get as much snow, but definitely get more rain. But not as much rain as in Stoke!

What were you like as a child? Were you good at school, always playing sport….

I was just a normal kid playing lot of sport, enjoying life as much as I could. I did okay at school and was on my way to university when Forest bought me. There is big skiing resort in my home town, so it was natural to go skiing over the winter months. Skiing was my main sport and my dream was to go to the Winter Olympic games.

At what age did you get into football?

I started at the age of 5. I played for my local Club KA Akureyri from the age of 5 until I left to play for Forest. My local club was always the number one club, but like every Icelander you have an English club that you support, and at that time I was growing up most boys supported Manchester United or Liverpool - and I was on the Liverpool side. The players I admired as I was growing up were Kevin Keegan and Kenny Dalglish.

Your elder brother Ormarr also played for Iceland – did you look up to him as a kid?

Well he was the one I chased around and followed, so you could say I looked up to him. It helped a lot to have an older brother, it made you push yourself harder and it was good to have someone to support you when you needed support.

When did you think you had a real chance of making it to be a professional footballer?

You always believe and dream, but you are not sure until you sign on the line.

TODDY ON: COMING TO ENGLAND

‍How did Nottingham Forest spot you?

I was invited for a trial in January 1989, but I declined and went on loan to Germany and played for a third division club called Paderborn. But the offer at Forest stood and I had a weeks trial in August the same year. I played 3 games and scored 4 goals. Brian Clough offered me a contract and I of course signed!

Was it hard to adjust to life in the UK after living in Iceland?

I would not say it was hard, but having said that there was lot of new things to learn. I came to a very big club playing for big crowds with very good players, many of them where England Internationals. I was just thrown into the deep end. I was used to playing in front of 500 to 800 spectators and the season in Iceland lasting 5 months. At the time I did not think to much about it, I just wanted to do well and get on with it.

He was a special man in every way.

He was brilliant. He was different. He was unique. He was not perfect, but who is? He was someone I loved.

In 1992/93 you broke through into the Forest team – was the style of football different to what you were used to?

After I signed for Forest in August 1989 I had to go back home and finish the season for my club. I needed a work permit before I could return to England, and that took a long time. The work permit came in the middle of that December. I started training with Forest on the 16th of December and played my first game for the first team on the 20th against Southampton.

I reported for the Southampton game and thought I was going to watch my first game as a Forest player. As I arrived at the ground they would not let me in to the ground, they wanted me to pay to get in! They thought I was a supporter of the team! What saved me was that Steve Sutton walked by and told them I was the new Forest player they should let me in.

I came into the dressing room and looked at the team sheet - there I was, number 8! I asked the coach Liam O’Kane if that position where I was playing. On the pitch I found out that I was playing midfield alongside Steve Hodge who was number 6.  This was my introduction to English football. The style was completely different, it was fast, it was hard it was 100 miles an hour. Bigger stadiums, more supporters, better players and lots more pressure

I wanted to stay in England, and Stoke was one of the clubs that contacted me. After meeting the people at the club and of course the manager, I felt it was a fantastic opportunity for me to play for very good club.

Stoke City was a club with good fan base that was on the up after getting promoted the year before.  But what I liked the most when I came first to Stoke was the stadium, there was something special about the Victoria Ground - as I found out when I started playing there.

Was your playing role at Stoke different to the one you had at Forest?

I had much bigger role at Stoke, especially after I started playing well and scoring goals. Goals can change a lot of things, not only games, but players. But having said that there where some fantastic players at Forest at the time so you had to be on your toes to have a big role there. We had Des Walker, Stuart Pearce, Steve Hodge, Nigel Clough, Gary Parker, Roy Keane, Lee Chapman, Gary Charles, Teddy Sheringham, Neal Webb, Franz Carr, Ian Woan…….all great players, so with all due respect to our group at Stoke it was harder to get a big role at Forest at the time, than it was at Stoke.

The 1993/94 season – we started quite slowly, then came that night against Manchester United in the cup. What do you remember of it?

What a game, and what fantastic goals from Mark Stein! The Victoria Ground was on fire. I think it was no surprise we started slowly as we were new in a very hard league, but the players were hard working, honest players with great attitude.  Everyone was ready to work for each other. We just kept going there, doing the things we were good at, working hard.

We then went to your old club Forest for a live TV game in the sun, and we played brilliantly?

Yes, it was a strange feeling going back, but a very nice one, especially that we did put in a very good performance against a very good team.

Your first goal for us was a winner against Grimsby. Remember it?

I have to say pass on the goal, I do not remember that goal sorry. But I do remember we went out after the game to have some fish and chips, and got the best fish and chips I have ever had. If my memory is right I think Nello (Neil Baldwin) the kitman got 3 portions! I wish I could remember the name of the chip shop.

You then went on a great run of scoring – why do you think you started scoring loads of goals at that time?

Like I said before, goals do not only change games, they can change players. The way we played was good for me: I could run with the ball, we had big Dave Regis and Mark playing upfront, and at the back we had hard working defenders like Vince, Lee Sandford and Ian Cranson that allowed me to do my things. Sometimes it worked, sometimes not. We just got on with it. Having said that I did score goals in Iceland, I did that for Iceland and Stoke but sadly not as much for Forest.

How hard was it losing Mark Stein and his goals?

It is always hard losing a top scorer and the players and fans were sad to see him go, buthaving said that I think everyone was pleased for him. He had done a good job for Stoke and deserved a chance in the Premier League.

What changed when Lou Macari left and Joe Jordan came in? Did we play more defensively? Did your role change?

I liked Joe Jordan, in fact I thought he was a fantastic person and a manager. He was completely opposite to Lou. Joe was organised, put on some fantastic sessions and planned every detail. Lou was not as organised, as he focused more on fitness than tactics. When it came to games he allowed the players more freedom, more than Joe.  Both of them aregood coaches and I enjoyed working with both of them.

You scored 10 goals in your first season at Stoke – a brilliant effort. Many were from long range. Which were your favourites?

I have to say I did enjoy every one of my goals, but my goal against Sunderland at home is one of my favourites. Running with the ball from the halfway line, going past a few players and a good strike! Okay, I know the keeper could have done better - but hey, it is a good goal!

What were your main strengths as a player?

I think my main strengths were I was able to take players on, and I was good striker of the ball.

TODDY ON: LIFE AFTER STOKE CITY

Why did you leave Stoke City just after the start of the new season? Contract dispute?

The reason was very simple - we could not agree on a contract.  There was no Bosman ruling at the time and the club wanted a fee for me.

I took over my old club KA in 2001 as a Player-Manager. Since then I have managed four Premier League clubs there and one First Division club in Iceland. I am now working for the Icelandic FA as Head coach for U19 , U18 national teams as well as assisting with the U17.

What did you think when the Icelandic consortium took over at Stoke City? Why didn’t it work out?

I was surprised that they took over Stoke. I think the main reason it did not work was lack of knowledge of Stoke City and the community.

Why does Iceland for such a small country produce so many good players and has a national team that is doing so well?

What do you do away from football?

I have a family - I am married to Ólof Mjöll and we have been married since 1994. We have one daughter her name is Isabella and is 16. In my spare time I like mountain cycling. What I have found out after becoming a coach is that there is not much spare time, compared to being a player!