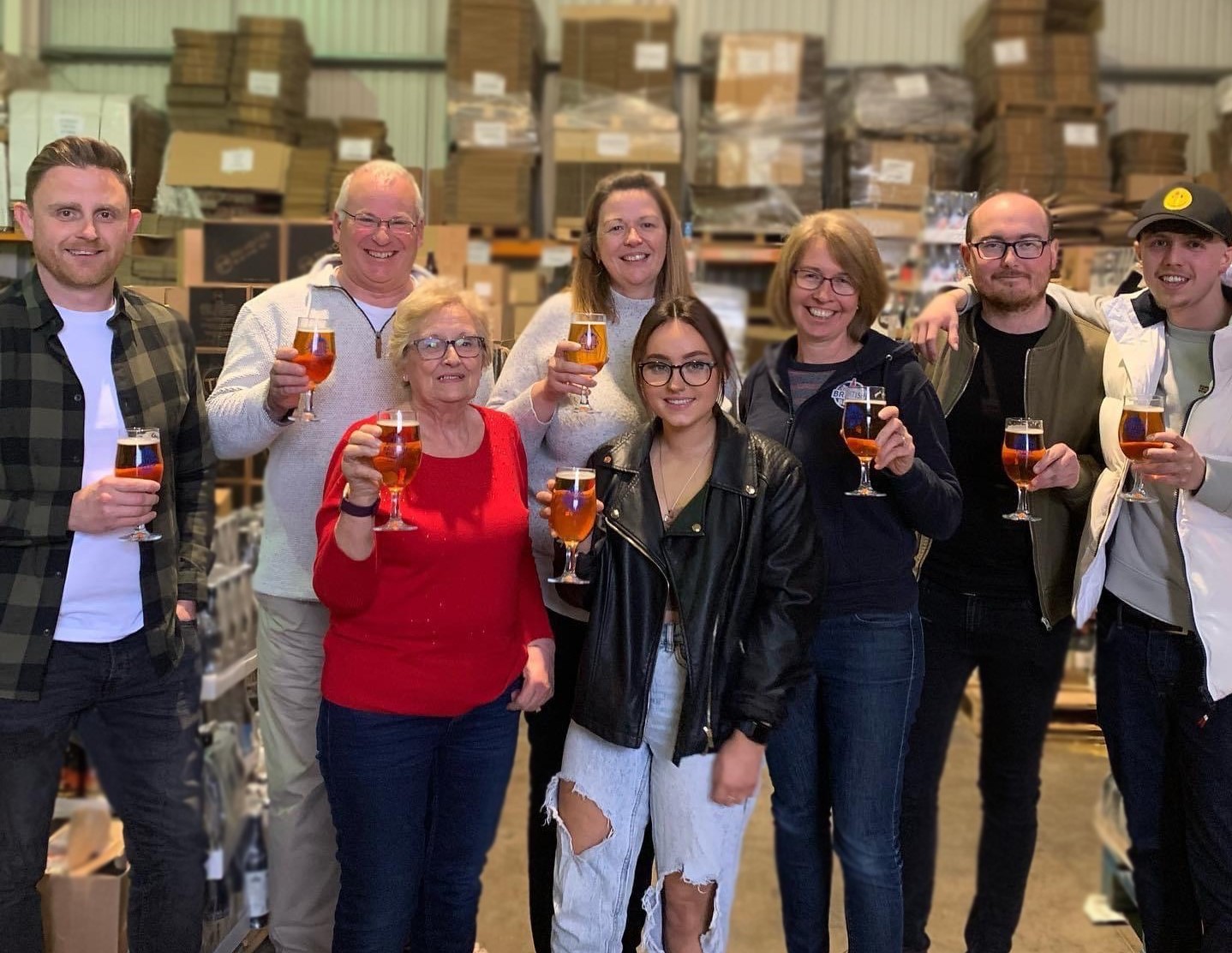 Award-winning online beer retailer, and friends of DUCK magazine, Best of British Beer have handed majority control to its eight-strong team in a move worth £650,000.

Best of British Beer founders Gill and Will Sherwin have created an Employee Ownership Trust making them minority shareholders in their business. The husband-and-wife team say the move creates a legacy and rewards their staff for their “outstanding commitment” to a growing business, with Will commenting “I believe a business should not simply be about profit. It should also be about happiness and on both counts we are winning.”

The Employee Ownership Trust offers job security and future proofs the business as new owners cannot come in and move the business away from its Newcastle-under-Lyme base if Will and Gill were ever inclined to sell or retire. The changes were revealed to the unsuspecting staff during a social quiz at the company’s headquarters in Silverdale, Staffordshire.

Lorna Furber, Customer Services Supervisor , said: “We have team quizzes from time to time so it didn’t seem unusual when we were each given an envelope, asked to open it and answer the questions.”

But it became Best of British Beer’s version of Who Wants to Be a Millionaire as each question had a monetary award. General Manager Chris Hall opened the final envelope with a life-changing price tag of £650,000. He said: “I had to name four breweries with an ST (for Staffordshire) post code. We genuinely had no idea what was going on but the figure did make me stutter over what would normally have been an easy question for someone who does the job I do.

We were then told the business was under new ownership and each opened another envelope which basically said it’s you!”.

Lorna said: “It’s just amazing. The eight of us have been gifted a better future. Our voices have always been heard by Will and Gill but now we have an official voice in the business.”

Former apprentice Emily Sale, who now works as a Best of British Beer accountants supervisor, finds herself as part owner of Best of British Beer, aged just 20. She said: “From being a 16-year-old apprentice to having shares in a business is something that I will always struggle to come to terms with. It’s a great opportunity to learn more about the industry and to have a say in decisions that will affect the future of the business.”The Employee Ownership Trust has been approved by HMRC.

It gives the employees a voice on the Board and there will now be regular Trust meetings where the team will lay out plans for the future.

A profit share scheme has been instigated and employees will get a tax-free bonus each year, depending on the company’s profitability.

Added Chris: “Everyone is motivated by this. For example, almost immediately, our warehouse team worked in their own time to rearrange things and find a better way of working.”

The Trust will also be involved in future decisions on jobs and any new members of the team will become Trust members after a year in post.

Gill said: “Best of British Beer was already a strong business but we benefited during lockdown as online ordering became ever more popular. We came through a very busy year thanks to the full support of our fantastic team.

Anyone in business knows they have to look to the future and, while we are not at that stage yet, there’s always questions around exit plans. We could look to external investors but that comes with a risk the business may be forced in different directions. For example, if we were to sell our majority shareholding, there could be a decision to uproot the business – as an online enterprise, Best of British Beer could operate from anywhere.”

Best of British Beer was started in 2011 from Will and Gill’s kitchen table – a table that now doubles as their office desks at the company’s base on the Silverdale Enterprise Park. Will picked up the company’s first batch of beer in his old Volvo estate car.

“We’re a business family and we want to offer our team security,” added Gill. “The Trust means the team have a majority stake and the business couldn’t be moved away from their home area by a third party.”

Will said: “It also creates a legacy for us. The business we built is now majority owned by the team we nurtured – they range from a 20-year-old  apprentice to Gill’s 75-year-old mum. We believe we have future proofed both the business and our team.”

Best of British Beer was founded with the concept of championing the UK’s independent brewers. The company has worked with more than 350 Scottish, Welsh and English breweries. The company also supplies products to a number of well-known companies, including notonthehighstreet.com, Funky Pigeon, Waitrose and Selfridges.