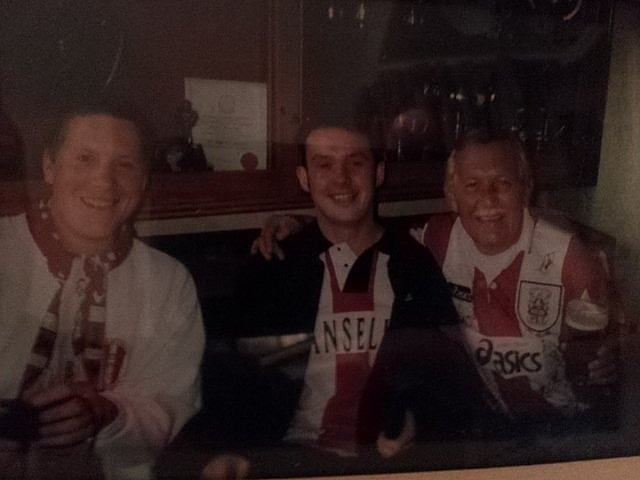 “Unlike most football fans, I can’t really remember my first Stoke game. My first clear memories of watching us were against Middlesbrough at Vale Park and then having a season ticket in 1977 in the Butler Street Stand. Relegation, inevitably, soon followed.

So, basically, I was introduced to the Potters after a visit to our local rivals ground, then being forced to sit in probably the only roofless seated area in Britain at that time and watch us go down..........But am I grateful that my old man grasped my 8year old hand all those years ago and walked me to those turnstiles? What a daft, rhetorical question.

Fathers are all too often the Nigel Gleghorn (or Glenn Whelan) of families – they do lots of unseen work that always needs doing; they rarely get the adoration they deserve; often steering the ship in the right direction; they have a quiet, unassuming style all of their own, and rarely let anyone down.

That was Peter William Bunn. And I will now always have the stomach-churning task of writing about him in a different tense.

Because dad sadly passed away on 24th November 2012, just an hour after watching the club he worshiped beat Fulham 1-0 at the Britannia Stadium. That he did so at around 5.50pm, just as Praise and Grumble was on, isn’t just ironic, it’s fate. Talking about Stoke City was one of life’s joys for dad. He also loved listening to the post-match Radio Stoke show every week.

It’s also fate, not irony, that he was aged 72 when he died. It simply couldn’t be any other number, could it?

Add onto the fact that he went quickly, and relatively painlessly, to sleep on the shoulder of his very best mate Terry (my uncle, who was driving), and that they were within a Greenhoff volley or Sir Stan mazy dribble of the Victoria Ground, simply makes me smile and actually think that if Carlsberg did ways to pass away......

Perhaps I’m looking for fate when there’s simply none there?

But whilst football is never ever “more than life or death”, it gives me huge comfort that dad passed away on such a seamlessly brilliant Stoke City Saturday afternoon.

The analogy with Nigel Gleghorn was given careful thought. He was a player my father really admired – a flashback to players who loved their football. Gleggy had a wand of a left foot, and was someone who always seemed grateful to be playing the working man’s ballet and to be playing for Stoke City. He also scored a most memorable goal in front of me and my father – no, not our second at Vale Park or against Plymouth at the Victoria Ground to seal the deal on promotion in1993……

It involved another Victoria – this time it was Victoria Park, the home of Hartlepool United. It’s one of my favourite awaydays of all time and dad can be vividly, easily seen on the telly on Central Sport a day or two later– to the right of the goal, jumping up and down as the 90th minute corner came in, not in anticipation of Gleghorn’s late winner, but because his bladder was about to explode thanks to his pre-match refreshments, after an unbelievable Usain Bolt-like sprint from coach to public house at 2.25pm!

It had to be in that 92/93 season, didn’t it? So many great memories, so many days when me, dad, Terry, Brad, Owen, Andy, Tim and a few others I can’t remember right now, would descend on football grounds the country over, watching Lou Macari’s team.

That day, for some reason, it was just me and dad. The 20th December 1992….....a dad and his son celebrating their team’s last minute winner, together, on the road to promotion, stood on an open terrace. Heaven.

No-one was prouder of Stoke City or Stoke-on-Trent than Peter William Bunn. When on holiday, he’d nearly always be spotted in a Stoke sweatshirt or t-shirt; it was like a privilege, a badge of honour. He saw it as almost ‘representing’ his city and club in foreign climes. The Cultural Attaché for Sneyd Green.

I vividly remember Wembley in 2000, and after beating Bristol City 2-1, we giddily went back to Harrow-on-the-Hill where our buses were parked. We went into a huge pub, full of Arsenal fans watching their team’s live game at Leeds. As we flooded into the pub, high on winning a trophy, no matter how small, we were given the usual “big-club, northern idiots” jibes from the deluded, self-admiring, self-loving Gunners, looking right down their noses at us as we entered.

Half an hour later, as the coaches were due to leave on the journey back to The Potteries. Dad had had enough.

“Sorry, but I’m not letting them run Stoke down. Back me up, lads”, he announced.

Then, as the assembled Stokies prepared to depart, and at the tender age of 60, he stood, arms outstretched on a chair, and shushed the pub before leading a huge, proud ‘Delilah’ that finally shut those of an Arsenal persuasion firmly up.

Although his Ashes are scattered at the bet365 Stadium – and by the way, the club were and have always been absolutely brilliant with the logistics of this – his heart and soul will forever remain with his family, and at the Victoria Ground.

For him, the lack of a ‘proper’ matchday routine was never really been replaced, even after 15 years at our new stadium. Dad’s routine was drinking in the Gardeners Retreat or Michelin Club, both close to Campbell Road, and a five minute brisk stroll at 2.40pm to the ground: Campbell Road – Nicholls Street – Lime Street.

He loved holding court with tales of Sir Stan leaving the ball by the corner flag and his marker also leaving the ball and simply following him, or the time he kept a pub near Buxton from rioting at closing time as the assembled Stokies wanted to see the FA Cup semi final goals on the telly on their way back from Hillsborough.

I hope the tales he told were true, but if they weren’t, we loved listening to them anyway: How he came back from Ajax so late that he and his mates simply went straight to Stoke’s next game; or how he moved his wedding day to a Sunday to avoid playing in a cricket match; and how he got a lift home on the team bus(and drank ale with the players) after his transport conked out on the way home from Spurs in the 70’s (all of those are definitely true!).

He told his tales time and again, but it didn’t matter. Our group loved nursing a pint of ‘Peddy’ and watching the glint in his eye as he told them.

But strangely, what makes him unique is that he’s just like any one of us.

Sounds daft that, yeah, but does anyone who doesn’t follow their football club truly know what it means to belong to something so special? How can they ever replace taking their kid to watch their city’s football club? How do they ever feel what we feel? Can their bond with their father ever be as emotionally watertight as ours is with our fathers who support the stripes?

All I do know is that I only realised some time later what we had and what we’ve lost, and that it would be a dream to be even half the dad he was, to my own kids. The hundreds of Stoke games we watched together and the hundreds of times he watched us, his lads, play football and cricket seem to have decreased in number as advancing years and grey hairs dim the memory. But deep down, we know he was always there, and now we somehow have to get used to the idea that he no longer is. His youngest grandkid now wears the beloved red and white stripes and I'd give anything for dad to be here to see him play just one game for Stoke.

But isn’t life also about what you leave behind?

If so, this proud man that me and my brother were honoured to call ‘dad’ has left something of more value than any lump sum of money ever could – he left us with the same standards as he had, a love of sport and the friendships this brings, to truly cherish our families, and that the North Wales sea is never too cold to swim in!  He did so in a beautifully understated manner, too. He never moaned or shouted. Good men don’t have to, do they? He was a true man of the Potteries, a proud Potteries man.

For me, my football club is such an integral part of who I am. That’s why, at 12.01am on November 25th 2012, – I wanted it to be the day after his death – I posted about my father’s passing on The Oatcake Messageboard.

I still don’t know truly why, to be honest, it’s just that dad’s family always seemed to include every single Stoke fan. The hundreds of messages meant more than anything to me and my family. Blokes who had been the game with dad in the 50’sonwards contacted us; strangers who knew of dad and had funny stories emailed me; even Port Vale fans set up a thread on their own messageboard, which was a fantastic touch.

What it means, and this is so clichéd, I know, is that those who watch football really are one family. We feel what everyone else feels, we drink from the same cup, no matter the strip we wear. Whilst staunchly parochial, we all have a respect and give a knowing doff of the cap to those who go through the good and dreadful times following a football club.

Fenton Bowling Club – then watching Stoke win alongside his best mate – three generations of the Bunn’s there at The Brit - going to sleep on his best mate –and 72, that beautiful, beautiful number, 72: It was scripted by the footballing Gods, dad, wasn’t it?

Whilst it still turns my stomach to know he’s no longer here, it swells my heart to know that he went on his own terms and how many of us wouldn’t want to go like that? It’s been nine long years since I last saw him in his SCFC manager’s coat, but he’ll always be there, walking with us to the ground come sun, rain, snow, wind or whatever the weather throws at us. A truly wonderful Stokie.

That my dad got to walk down, well, shuffled down as he wasn’t brilliant on his feet for some time, Wembley Way with his family on May 14th, 2011 now means everything to me. That we didn’t win hurts, but it would have hurt more if we’d have won and he wasn’t there!

Because even if we win the FA Cup one glorious day, it will never really mean the same without dad being present: standing still, huge beaming smile, and holding his arms high in the air when we scored, as he always did as utter carnage reigned around him.

Mere memories aren’t enough, they never are. But they have to suffice as he’s not here now. I pray he knew how much he was loved, but being a bloke I rarely said it enough when it was needed and necessary. I hope he could hear me as I stood by him, stroking his hair as he lay motionless, looking serenely at peace with the world, on that dreadful Saturday night at the hospital. “We won dad, we won”, I kept muttering. He knew.

They really do have to be from the most poignant, beautiful and apt football song ever written, don’t they? A song that he actually sung on way back in 72 with the supporters club, and one that simply sums this article up succinctly: