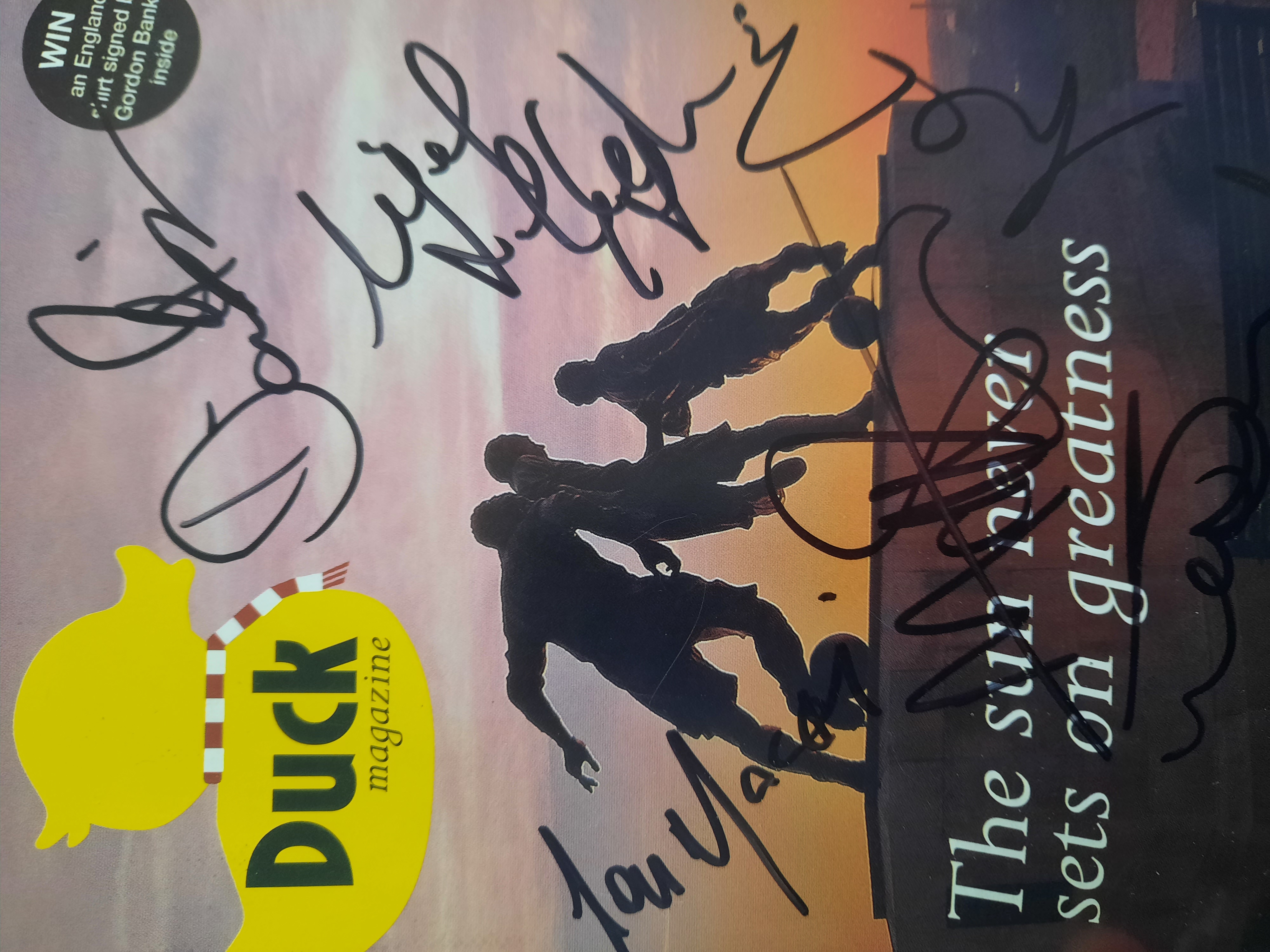 Nine years ago today, a middle-aged bloke armed with a rucksack, a smile, some change, and a smidgeon of hope, stood outside the away end at Loftus Road. In the rucksack were 100 copies of issue 1 of DUCK magazine. Nine years and 73 issues later, and we still get those same butterflies in the stomach whenever we are selling. When we don’t, we’ll probably call it a day…..

It was an idea born in a school office, around February 2013. Me and Orfy were both middle leaders in the same secondary school, both of us loved writing about SCFC, and both of us wrote for The Oatcake amongst other publications.

I don’t know whose initial idea it was, but it made sense. We were also both shattered from long working hours and needed something to give us energy again. Whilst hugely proud of being featured in a seminal football fanzine, both of us had very similar ideas and a vision for what we wanted to produce. There really was no common sense in producing what you would call an archetypal fanzine – The Oatcake had done that so well for so many years.

We wanted our magazine to look, feel, and read differently. To compliment The Oatcake, not compete with it. I mean, how could it – The Oatie was a Stoke City institution and always will be. Despite me and Orfy being thicker than a whale omelette, we’re not daft enough to bring out a similar product to a matchday ST4 staple. We wanted to bring out a monthly magazine that was colour, glossy, featured interviews on a regular basis, and one that would read as well in a year or two’s time rather than being mainly current and topical. Match reports from a match six weeks ago just don’t work, and Smudge and the gang did what they do so well with what was currently happening at Stoke. No, The Oatcake coming out for every home game meant that our focus had to be different. If folk were going to part with their hard-earned, then we needed a point of difference.

Luckily, we had a number of mates who would help to fill it with content. Indeed, content has never been a real problem for us. We are blessed that so many people have written for us and still want to do so, and so it was more a case of what they’d write about and how the magazine would look. We have been supremely lucky in that we had Rob to start designing it for us in our initial years, and then Joe Barbieri took over the reins from him. We think their work has been stunning and adds so much to the magazine.

We had both edited fanzines before. I edited A ViewTo A Kiln, whilst Orfy had done The Victoria Voice and Veni, Vidi, Vici. A fanzine name can be the easiest or hardest thing to do – sometimes they literally jump out at you, sometimes they are based on your club’s nickname, anthem, kit etc…..but we wanted one that would be easily identifiable with the club, the city, but also get other folk asking questions. Indeed, even Stokies asked “Why is your magazine called DUCK, duck?” It’s also important to keep it relatively short – shouting “Issue 7 A View To A kiln, only £2” every 30 seconds for two hours is knackering. By the time you get to the “£2” bit, dozens have walked past you.

We also thought that as a future brand, DUCK would work too – if it lasted that long. Our merchandise has proved more popular than the magazine, so that’s actually true. A love with our football club and city was important to us. For much of our lives, Stoke-on-Trent was at the crappy end of the stick when it came to cheap jibes….”Worst place to live in the UK”, and “The Sick City” were just two unofficial titles that we were given. And kids, that’s the old meaning of sick, not the new one! No, we wanted Stoke to be associated with something new, shiny, creative, and different. We wanted to champion our club, our city, and its people. We still do. That’s our raison d’etre – we have a fierce parochial pride, and we want generations to come to share that. One thing we are massively proud of – proud of you, our readers - is that we have raised around £12,000 for local charities over the years. Something we need to do more of!

Nostalgia has always played a huge part in DUCK. That was intended from day one. Whilst our trophy cabinet may not be teeming, we have a club with a wealth of history. We have a supporter base with a wealth of knowledge and stories, too. We will never apologise for looking back. We just hope our kids and their kids etc can do the same in the future. They will do, because football is all about people and stories. That’s what makes our game and our club so brilliant. We’re not here for the trophies, are we? We’re all here because our football club chose us, not the other way around. We are here because we have an unbreakable love for The Potters that is based on who we are, not what we’ve won.

And whilst not wanting to go all Against Modern Football on you, we see football as far more than the 90 minutes. Indeed, the 90 minutes has often been the worst bit! No, matchday is the culmination of all the days since your previous match. It encompasses mates, family, plans, beer, work, transport, music, clothes, love, hatred, and every emotion in between. There’s nowt quite like football, and that’s what we wanted to convey in the magazine. I still read articles from early issues of DUCK, and I still think they read very well. That was a real aim of ours, as was getting interviews in the mag…..

We’ve had well over 40 interviews in the last 9 years: from current players to DJ’s; from managers to Nello – and everything and everyone in between. Often, the best ones are the ones you don’t expect. All are fascinating and a privilege to take part in. Highlights include sitting down for two hours with the legend, Gordon Banks. For Banksy to discuss his save from Pele with me using the salt and pepper pots and my pens in the Holiday Inn by junction 15 of the M6 was both surreal and an experience I’ll never forget; In issue 73, Orfy chatted to Nick Powell – a player who is unpredictable and exciting both off and on the pitch; Ryan Shawcross doesn’t do many interviews, but we were proud to get him in the issue before Covid-19 hit the UK; and then you have the likes of Steino, Lou, Bojan, Muni, Jimmy, TC, Bertie, Vinny, Ric etc…….all have been in front of us, all with stories to tell. One thing in common – they love you lot, the Stoke support. Our fans really do make a big impression on their heroes.

Yup, nine years ago, Orfy ventured down to West London with the Sir Stan statue front-covered issue one. We and he didn’t know what to expect, but on a day when a 2-0 win virtually ensured we stayed up that season, and on a day when we sang our praises for Paul Ware, Orfy managed to shift every copy. Selling has always been bloody hard work, but it can also be the best two hours of the week, too. To sell a new mag takes some balls, it really does. That’s why 108 months later, we never take our readership for granted and never will. And why we still get butterflies.

Me and Orfy didn’t expect DUCK to still be going. Indeed, we are very lucky to still be doing so and the next few months are crucial to us. Back in print, our pre-order sales are down for this coming issue and all it takes is for an hour or two of matchday rain to put a huge spanner in our works. But so long as we don’t make a regular loss, we’ll keep on doing it. Yes, it takes hours to do. Yes, we have both said “THAT’s IT!!!!!!” numerous times. But it’s also like a kid to us. We have a real bond with those that support us, and have made numerous friends over the years. It’s a privilege to write about something that has been such a huge part of our lives. We just hope that this time next year we are around to stick a tenth candle on the cake – please spread the word, and if you ever think of anyone who would like DUCK – tell them!